Gone are the days when USCIS used to receive more than 65,000 H-1B visa petitions within a day or two of the start of the H-1B filing period, April 1. Increased scrutiny, rising US visa fees, stringent new rules and other factors have led to a steep fall in the demand for the coveted H-1B visa. The H-1B visa was once upon a time one of the most sought after visas categories but it has lost its luster in the past few years. Indian IT companies, one of the prominent users of H-1B visa program, are now sponsoring fewer Indian professionals for the H-1B visa and prefer to hire US nationals, or, in the alternative, make intracompany transfers, or extend the tenure of Indian professionals already working on an H-1B.

As of April 15, 2011, USCIS has received approximately 7, 100 H1B cap-subject petitions and 5,100 H-1B petitions for foreign nationals with advanced degrees. As such, USCIS will continue to receive applications for the H-1B visa until the cap is reached. Some immigration experts believe that since the H-1B cap was not reached until January 2011 for Fiscal Year 2011 and December 2009 for Fiscal Year 2010, the H-1B for Fiscal Year 2012 will also be open for an extended period time.

The USCIS has released Approval and Denial Statistics for EB-11 (Extraordinary Worker) and EB-12 (Outstanding Researcher/Professor) I-140 Petitions. The USCIS record reflects that EB-11 and EB-12 approval rates had been higher than 50% in general from FY 2005 through FY 2010. The approval numbers have steadily increased more or less. Click the following image to view the exact numbers of approvals and denials. 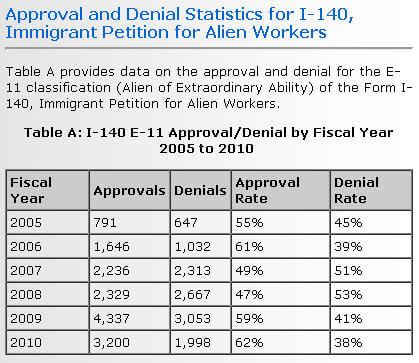 USCIS has updated the count of H1B visa petitions received and counted towards the H1B cap for the fiscal year 2012 employment. As of April 15, 2011, USCIS has received approximately 7,100 H1B cap-subject petitions and 5,100 H-1B petitions for foreign nationals with advanced degrees.

USCIS announced a final rule that adopts, without change, an interim rule to improve the integrity of the Employment Eligibility Verification (Form I-9) process. USCIS received approximately 75 public comments in response to the interim rule, which has been in effect since April 3, 2009.

H-1B employees, whose timely- filed applications for extension of visas are pending before US immigration authorities, may not be arrested for “overstaying” now following a recent federal court ruling on the issue.

Check out our In Focus section for this month, titled ‘Dual Intent – Did the Consulate Deny Your Nonimmigrant Visa Because of It?’ explains why most of the nonimmigrant visas are denied, the responsibility of a foreign national seeking a nonimmigrant visa, an introduction to the doctrine of dual intent and a list of nonimmigrant classifications that support the dual intent policy. Every month we introduce a new and interesting question for our opinion poll. Last month’s poll results indicate that 65.22 % of the respondents think President Obama is doing enough to fix the immigration system. We appreciate that people take interest in the opinion question and cast their vote to give us their feedback. Keep it up! And continue to cast your vote to express Your Opinion.

We congratulate Mark Orlan for winning last month’s Immigration Quiz. Again, we received a significant number of responses from our readers, who talked about various solutions to support their position, but Mark Orlan gave the correct answer and won a free online consultation to discuss the concerned Immigration issues. So it’s time to get ready for this month’s quiz. If you know the correct answer your name might be featured in next month’s newsletter. All the Best!!!