As the world’s economy heads deeper into recession, people around the globe have their eyes glued with hope on the ‘American Recovery and Reinvestment Act of 2009’ (ARRA). People have high hopes that the ‘American Recovery and Reinvestment Act’, which took effect on February 17, 2009, will be a complete success at jump-starting the US and world economies. 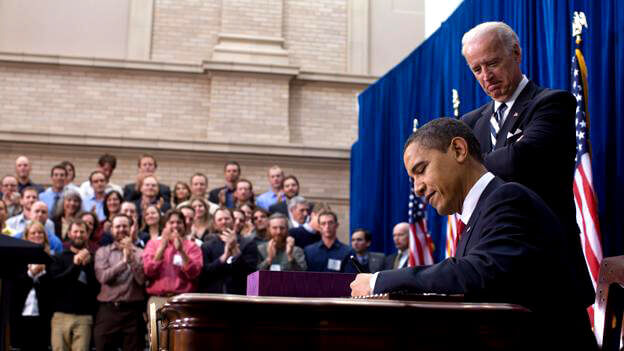 The above graph illustrates the estimated difference between potential GDP in the Congressional Budget Office’s (CBO) Baseline and the actual GDP with and without the impact of the ARRA of 2009.

As per CBO’s estimation, in the short run ARRA will raise the GDP and increase employment by adding to the aggregate demand, thereby boosting the utilization of labor and capital that would otherwise remain unused because the economy is in recession.

Most of the budgetary effects of the legislation are estimated to occur over the next few years, and as those effects diminish, the short-run impact on the economy will fade.

Unfortunately, the new rules set by the ARRA and not immigration neutral and impose additional requirements and restrictions. These restrictions fall solely upon H-1B filings made by employers that received funding under the Emergency Economic Stabilization Act of 2008 (the so-called TARP Bill), or those receiving certain short-term, low-interest loans through the Federal Reserve. These changes are significant, both for the particular employers affected as well as for the policy and politics they represent. They do not impact most H-1B employees working currently, however; even those working for affected employers.

As the time moves forward, we are heading closer to the H-1B filing season. March is a crucial month in immigration. It’s the time for companies to prepare their applications and get ready to file for H-1B Visas. The initial filing date for H-1B visas for Fiscal Year 2010 (FY 2010) is April 1, 2009.

It is possible that, due to the economy, the number of H-1B filings may be fewer this time than in recent years. People and companies around the globe are certainly feeling the pain of the US economic recession. More than 500,000 employees were laid off in January 2009 alone. One US senator has gone so far as to request that Microsoft to lay off H-1B workers before American workers.

Because more than 1 Million jobs have been lost in last few months finding a job right now is very difficult. Further evidence of the economic times shows through the fact that many foreign nationals applied for H-1Bs last year, got selected in lottery, but did not come to the US because their employer did not send the approval papers for visa stamping. There are not many job openings available right now, and employers that do have available opennings may see more than 1000 people apply for a single position. Many employees (H-1B and otherwise) are “on the bench,” trying hard to find any contract position. But, not many positions are open in this job market.

It’s really hard to predict number of H-1B petitions the USCIS will receive this year during the initial filing period, but it is anticipated that the number will be 20 to 30% lower than last year. Many foreign nationals are opting to stay in their respective home countries and find a position rather than applying for an H-1B and living with risk and uncertainty of losing their job after coming to US.
The economy is in such trouble that, even with passage of this package, unemployment rates are expected to rise to between eight and nine percent this year. Tough choices have been made in this legislation and fiscal discipline will demand more tough choices in years to come.

Will the economy rebound?

Most experts expect that the economy will rebound in 1-2 years. Those same experts think that people who got laid off will find new jobs as the economy starts to improve.

Well, keep an eye on immigration news and developments on our website and stay informed about any changes in the US immigration laws. It’s very unfortunate that the US has seen over one million jobs lost in recent months, but all we can do is keep our fingers crossed and expect a positive outcome from the American Recovery and Reinvestment Act of 2009.

U.S. Citizenship and Immigration Services (USCIS) today announced that it will begin accepting H-1B petitions subject to the fiscal year 2010 (FY 2010) cap on April 1, 2009. Cases will be considered accepted on the date that USCIS takes possession of the petition; not the date that the petition is postmarked.

USCIS on March 20, 2009, has announced additional requirements for employers, who receive funds through TARP or under section 13 of the Federal Reserve Act (covered funding), before they may hire a foreign national to work in the H-1B specialty occupation category. The new Employ American Workers Act, (EAWA), signed into law by President Obama as part of the American Recovery and Reinvestment Act (ARRA) was enacted to ensure that companies receiving covered funding do not displace U.S. workers.

Now for the regulars – this month’s Immigration Article entitled ‘Visa Denied Under Section 241(b)? Do You Know What is it and How to Come Out of it?’ is a must read if you are applying or intend to apply for a non-immigrant visa. The article gives you a detailed insight about the visa denial under section 214(b) and also tells you how you can come out of it. Also check out our In Focus section for this month, which informs you how you can extend your status in the US. This article has been designed to enlighten you with the pros and cons of applying for an extension of stay in the US.

Every month we introduce a new and interesting question for our opinion poll. Last month’s poll results indicate that 62.71% of the respondents believe that it is beneficial to introduce a stricter H-1B visa reform to make it mandatory for outsourcing companies to hire local American workers before seeking any H-1B visas for the foreign employees. We appreciate that people take interest in the opinion question and cast their vote to give us their feedback. Keep it up! And continue to cast your vote to express Your Opinion.

We congratulate Cleve Connell for winning last month’s Immigration Quiz. Again, we received a significant number of responses from our readers, who talked about various solutions to support their position, but Cleve Connell gave the correct answer and won a free online consultation to discuss the concerned Immigration issues. So it’s time to get ready for this month’s quiz. If you know the correct answer your name might be featured in next month’s newsletter. All the Best!!!