Hello and welcome to the May 2009 Immigration Newsletter! 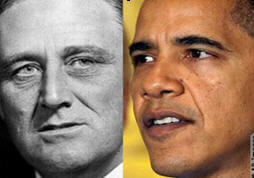 President Obama completed his first 100 days as a President of the United States of America on April 29, 2009.The president continues to enjoy high marks from the public–69% of people approve of the job Obama is doing according to the latest Wall Street Journal. NBC News poll says, Barack Obama received better ratings than either former Presidents George W. Bush or Bill Clinton had at their respective 100-day marks.

As Barack Obama completes his first 100 days as U.S. president, his performance is being compared with that of former President Franklin D Roosevelt. President Obama says, “I’m confident in the future, but I’m not content with the present.”

The president continues to get high personal favorability ratings across a range of attributes. Overall, 72 percent of Americans have a favorable impression of Obama, down slightly from the eve of his inaugural but far higher than it was during the 2008 campaign. The Washington Post reported President Obama’s overall rating remains high, with 69 percent of Americans approving of his job performance.

Opps! The H-1B Cap Is Not Reached Yet:

In a dramatic change from the past few years, it has been more than a month since the H-1B filing period began and the USCIS reports that it has not yet reached the H-1B cap for fiscal year 2010. This literally has been one of the biggest surprises of the year. USCIS on April 27 informed the public that they have received approximately 45,500 H-1B petitions for fiscal year 2010 employment. And their next update on May 5 showed there was no change in the H-1B cap numbers.

The economic recession and TARP funding rules have made H-1B hiring tough. With so many difficulties for H-1Bs already lined up, along came the Durbin-Grassley Act. Senators Dick Durbin (D-IL) and Chuck Grassley (R-IA) on April 24, 2009, introduced the H-1B and L-1 Visa Reform Act. The Durbin-Grassley Act aims to reform the H-1B and L-1 guest-worker programs to prevent abuse and fraud and to protect American workers.

Most professionals seem to prefer to work in their home country rather than coming to US with the risks and uncertainties they will face. However, the USCIS presumes that the H-1B visa demand will increase in the coming weeks, as students complete their degrees and/or complete their OPT and become eligible for H-1B visa.

Contact VisaPro immediately to assist you with the H-1B filing using the fast, easy and economical online visa processing. 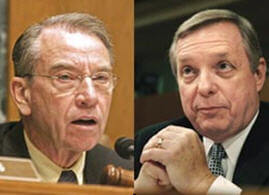 It is the second time in two years Senators Grassley (left in picture) and Durbin proposed legislation that aims to curb the use of H-1B and L1 visas. They introduced a bill that prohibits employers from hiring additional H-1B and L-1 guest workers if over 50 per cent of their employees in the US are H-1B and L-1 visa holders. The H-1B program allows US companies to bring in foreign skilled workers when such skills are in short supply.

“Our immigration policy should seek to complement our U.S. workforce, not replace it,” Durbin said in introducing the bill. “Some employers have abused the H-1B and L-1 temporary work visa programs, using them to bypass qualified American job applicants. This bill will set up safeguards for American workers, and provide much-needed oversight and enforcement of employers who fail to abide by the law.”

“This is about protecting the American worker,” said Senator Grassley. “We’re closing loopholes that employers have exploited by requiring them to be more transparent about their hiring and we’re ensuring more oversight of these visa programs to reduce fraud and abuse. A little sunshine will go a long way to help the American worker.”

The Senate is not only looking into abuses of the H-1B program, but has also started taking a close look at the L-1 visa. With the Senate requesting tougher scrutinizing of worker visas, we may soon see many companies refraining from hiring skilled foreign workers to avoid unnecessary hassles.

Many believe if this bill is passed, it will make America globally less competitive. Many skilled workers would start looking at European countries rather than the US. These countries would love to have these skilled workers to gain an edge over their counterparts. If this were to happen America could lose its leading position in the world.

On other hand, foreign students and workers who might prefer to stay in the US can, and increasingly will, also return to their home countries to launch businesses. They can then compete with American companies instead of adding value to them. And when they return home, they can honestly say that America is not the land of opportunity for people like them.

DOL Postpones Use of iCERT System for LCAs

The Department of Labor (DOL) has postponed obligatory use of the new iCERT online portal for labor condition applications (LCAs). Employers will now be able to use the legacy online system for      H-1B, E-3 and H-1B1 LCAs through June 30. USCIS Update on Extension of J-1 Entry Date and Qualification for Conrad 30 Program

USCIS reminds public that the Public Law 111-9 extends the date by which international medical graduates are to be granted                   J-1 nonimmigrant status in order to later qualify for the “Conrad 30” program.

Now for the regulars – this month’s Immigration Article entitled ‘Can One Get Married On a Tourist Visa?’ discusses all the pros and cons of one getting married to a US citizen on a tourist visa. Also check out our In Focus section for this month, which is designed to help you understand the meaning and purpose of the Electronic System for Travel Authorization (ESTA). The article also throws a light on the differences between the Electronic System for Travel Authorization and a visa.

Every month we introduce a new and interesting question for our opinion poll. Last month’s poll results indicate that 55% of the respondents believe that USCIS will receive enough petitions to meet the H-1B cap for the FY2010. We appreciate that people take interest in the opinion question and cast their vote to give us their feedback. Keep it up! And continue to cast your vote to express Your Opinion.

We congratulate Abbas for winning last month’s Immigration Quiz. Again, we received a significant number of responses from our readers, who talked about various solutions to support their position, but Abbas gave the correct answer and won a free online consultation to discuss the concerned Immigration issues. So it’s time to get ready for this month’s quiz. If you know the correct answer your name might be featured in next month’s newsletter. All the Best!!!