Hello and welcome to the November 2009 Immigration Newsletter!

A hearty welcome back to our regular readers and our new readers. The Thanksgiving Day marks the beginning of the traditional Christmas shopping season in the U.S. With the onset of fall and the approach of winter it’s been getting quite chilly in the U.S., however, people are heartily enjoying the weather and change of seasons. The happiness is doubled as we see signs of the economy moving back to normal.

The hot immigration news this month once again involves the H-1B visa program. After months of slow movement H-1B usage surged in October and early November. According to the latest figures from the U.S. Citizenship and Immigration Services (USCIS) for Fiscal Year (FY) 2010 the pool of 20,000 H-1B numbers for holders of U.S. advanced degrees has now been exhausted. USCIS will continue to accept H-1B petitions for employment in FY 2010, however, any petition that is filed on behalf of a foreign national with a U.S. advanced degree will now be counted against the standard H-1B cap.

As of November 20, 2009 the USCIS has advised that 55,600 petitions had been filed against the 2010 cap. This is a jump of 1,800 visa application in just two weeks, and 7,800 since September 25. The surge can be attributed to the improving economy and the upcoming December graduation season.

Though filing rates were sluggish earlier this year, this recent uptick suggests that demand for H-1B workers is increasing. This means that remaining FY 2010 cap numbers could disappear more quickly than previous usage indicated. It also means that there could be more competition for FY 2011 cap numbers when next year’s filing season opens on April 1, 2010.

Now on to some other interesting news… Let’s continue with our voyage of knowledge and wisdom with one of the most pleasant announcements of the year. Guess??? No, I’m not talking about the H-1B visa (we already hit that topic). I’m talking about President Obama’s decision to end America’s 22-year HIV ban. President Barack Obama’s administration published a final rule on November 2, 2009, that will end the U.S. ban on HIV-positive foreign visitors and immigrants. The change will take effect in January 2010.

The President announced on October 30, 2009, the elimination of the HIV entry ban. Since 1987, HIV-positive travelers and immigrants have been banned from entering or traveling through the United States without a special waiver. In July 2008, Congress removed all legislative barriers to repealing the ban and paved the way for HHS to repeal the ban.

“We talk about reducing the stigma of this disease, yet we’ve treated a visitor living with it as a threat. We lead the world when it comes to helping stem the AIDS pandemic, yet we are one of only a dozen countries that still bar people with HIV from entering our own country. If we want to be the global leader in combating HIV/AIDS, we need to act like it.”

“Twenty-two years ago, in a decision rooted in fear rather than fact, the United States instituted a travel ban on entry into the country for people living with HIV/AIDS,” Obama said, announcing the new policy on October 30.

Effective January 2010, non-U.S. citizens who are HIV positive will be able to enter the U.S. just like any other person does. This is a major step in ending the stigma associated with HIV and we heartily congratulate President for taking such a bold step to keep the unity and humanity alive in the world.

Sometime this year, President Obama will press Congress to approve his national health insurance plan. Obama’s plan, perhaps best described in Jacob Hacker’s “Health Care for America” plan has the ambitious and expensive goal of providing affordable health insurance to all Americans through a combination of a new federal “Medicare-like” program and existing employer-provided health plans.

We still don’t know what the final health insurance plan will look like, but the image below may give you some idea on the Obama administration’s idea of the Health Care for America plan. 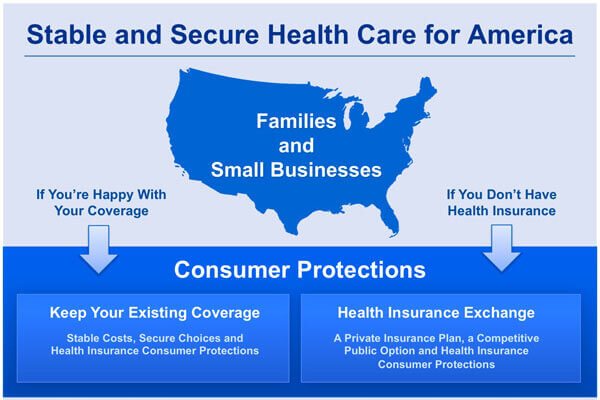 Supporters of the Health Care for America plan say it would provide the U.S. with universal health care coverage by:

For persons already covered by employer-provided health insurance, Health Care for America would virtually eliminate the suddenly very real threat of losing coverage because of layoffs.

USCIS, on November 5, 2009, announced that it will temporarily accept H-1B petitions filed without Labor Condition Applications that have been certified by the Department of Labor.

USCIS has issued Q&A on the recent revisions to Form I-693, Report of Medical Examination and Vaccination Record, and changes to the tuberculosis testing requirement for adjustment of status applicants.

Now for the regulars – this month’s Immigration Article throws a light on Fiancée Visa Processing in East Asian Countries. Also check out our In Focus section for this month, entitled ‘U.S. Travel Tips – 7 Tips for Travelers to the U.S. for a Safe Journey,’ which will help the travelers to the U.S. to be prepared for a safe journey and a secure stay in the U.S.

Every month we introduce a new and interesting question for our opinion poll. Last month’s poll results indicate that 76.92% of the respondents believe that the Recovery Act has made significant progress. We appreciate that people take interest in the opinion question and cast their vote to give us their feedback. Keep it up! And continue to cast your vote to express Your Opinion.

We congratulate Dominic Rattansey for winning last month’s Immigration Quiz. Again, we received a significant number of responses from our readers, who talked about various solutions to support their position, but Dominic Rattansey gave the correct answer and won free online consultation to discuss the concerned Immigration issues. So it’s time to get ready for this month’s quiz. If you know the correct answer your name might be featured in next month’s newsletter. All the Best!!!