Hello and welcome to the May 2011 Immigration Newsletter!

The U.S. Department of State announced that the results of the Fiscal Year 2012 Diversity Immigrant Visa Lottery have been voided and that they are going to re-run the lottery later this year. Thousands of applicants who had received confirmation that they had been picked were extremely disappointed to find out that they had not “won”. According to the Stated Department, the results that were originally posted were invalid as “they did not represent a fair, random selection of entrants, as required by U.S. law”. The State Department blamed a computer error for the mishap. Press reports have suggested that the glitch favored applicants filing early in the process. The DOS has stressed that there will be no new entry registration period and that the “new random selection process will be conducted based on the original entries.” According to the Department of State website, the results should be posted on or around July 15, 2011. Foreign nationals who registered during the initial entry period do not have re-register and will maintain their original confirmation numbers. Our readers are reminded to be aware of scams. The DOS will not send emails to lottery winners and government sites always end in “.gov”. Any emails or individuals instructing you that there is a new entry period or that re-registration is required are fraudulent. Also, the DOS will not request any personal information through email. 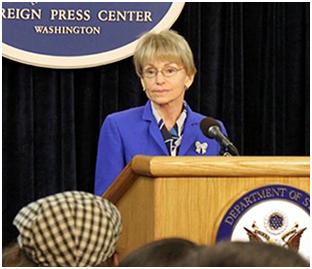 Assistant Secretary of the Bureau of Consular Affairs Janice Jacobs

Foreign visitors to the U.S. are not the only ones who realize that the visitor visa system is in need of serious repair. During a recent visit to Australia, Assistant Secretary of the Bureau of Consular Affairs Janice Jacobs acknowledged that the visa process was “inefficient” and was having an effect on tourism. She stated that the State Department had a 20 year plan to revamp the visitor visa system. Part of the changes is aimed at making the process easier for tourists and visitors from countries that are not eligible for the Visa Waiver Program, especially as it impacts those from Brazil, China and India, popularly known as “BRIC”. Ms. Jacobs acknowledged that tourism into the U.S. accounts for millions of jobs as well as brings in over $3 trillion into the U.S. economy. However, Ms. Jacobs also acknowledged that in order to regain some of the discretion her department had before 9/11, laws would have to be changed.

With a view to transform the intake and review process for immigrant investors and to improve the legal immigration system and to meet the country’s economic and national security needs for the 21st century, the USCIS has proposed significant enhancements to the administration of the USCIS Immigrant Investor Program, commonly referred to as the EB-5 Program.

The three fundamental changes proposed are:

This proposal will be online until June 17, 2011, for public comment—providing stakeholders an opportunity to offer feedback on the proposed changes to the administration of the EB-5 Program.

Other Developments in Immigration Law

USCIS proposed significant enhancements to the administration of the EB-5 Program to transform the intake and review process for immigrant investors.

USCIS Centralizes Filing of Form I-130

USCIS has announced that effective Aug. 15, 2011, petitioners residing in countries without USCIS offices will be able to file a Petition for an Alien Relative (Form I-130), with the USCIS Chicago Lockbox facility. This will increase the efficiency of the relative petition filing process and give USCIS more flexibility in managing its workload.

Check out our In Focus section for this month, titled ‘The K-1 Fiancé(e) Visa Interview: 45 Questions You Need to Know’ Every month we introduce a new and interesting question for our opinion poll. Last month’s poll results indicate that 66.67% of the respondents do not favor Sen. Grassley’s concern that companies are using B-1 Visa Program to circumvent H-1B requirements. We appreciate that people take interest in the opinion question and cast their vote to give us their feedback. Keep it up! And continue to cast your vote to express Your Opinion.

We congratulate Maverin Peter for winning last month’s Immigration Quiz. Again, we received a significant number of responses from our readers, who talked about various solutions to support their position, but Maverin Peter gave the correct answer and won a free online consultation to discuss the concerned Immigration issues. So it’s time to get ready for this month’s quiz. If you know the correct answer your name might be featured in next month’s newsletter. All the Best!!!