Hello and welcome to the October 2009 Immigration Newsletter!

Fall has set in, the leaves are changing color here, and we have several things to talk about in immigration. The first week of October marked the beginning of the DV-2011 lottery program. This is the time many people wait for all year long. However, unlike previous years, the 2011 DV Lottery came in with so little fanfare that unless you were paying close attention you would have missed the announcement. While the start of the DV program this year received very little attention it is still a very important program for many people. For those wanting to apply the list of eligible countries remains same as that for DV-2010.

One of the major, and most dramatic changes for the month is the USCIS website. The USCIS recently launched its redesigned website, now in both English and Spanish. The move came after it had received many complaints that the previous website was “frustrating” and “hard to navigate.” The new website now looks more appealing and user-friendly and is more customer-centric.

Darrell West, Vice President and Director of Governance Studies at the Brookings Institution, said the redesigned USCIS website appears to be more user-friendly than the old Web portal and more logically organized. “One of the best features is the ability to personalize the site to your particular situation,” West said.

A simple example of the new user-friendly features is that the new USCIS website allows applicants who have filed for citizenship to track the progress of their cases.

Jeffrey Zients, the Obama administration’s chief performance officer, said the new website was a “significant step” for the public and USCIS’s customers.

“It’s also a significant step for our federal government in terms of providing services that [are] smarter, faster and lower cost,” Zients said at a press conference where officials unveiled the redesigned website last week.

USCIS processes requests about immigration-related applications and petitions, and the agency’s existing Web site was one of the most-used government sites with about 230,000 users per day. However, USCIS said users of the old site found it difficult to use. 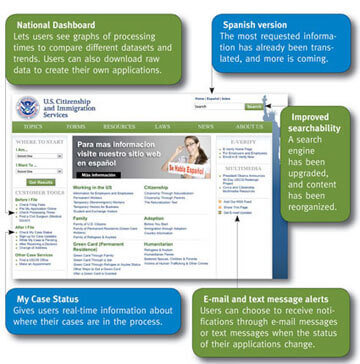 The new website allows users to choose to receive notifications by e-mail or text message when the status of an application changes, and the site also provides access to national trend data and raw data that can be used in additional applications. And for the first time, the redesigned USCIS.gov has a version in Spanish.

Following in the foot-steps of USCIS, the US Department of State has also revamped its website. 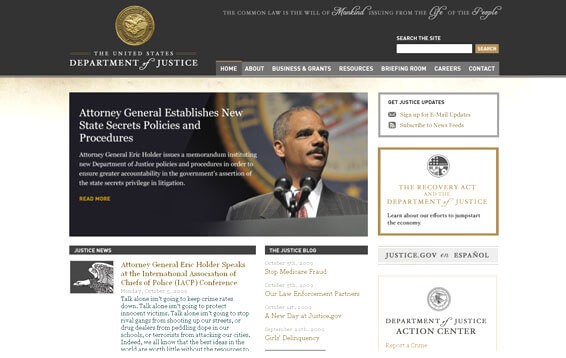 The Department of Justice (DOJ) unveiled its revamped website on October 1, 2009. The website was redesigned in an effort to increase “openness and transparency in government.” Utilizing a variety of online tools, they will be able to share news and information, not just on the DOJ web site, but through popular social networks Twitter, YouTube, MySpace and Facebook. The Justice Department’s presence on these social networks will allow Americans to interact with the Department in entirely new ways.

The new website has incorporated more multimedia than ever before. We’re told that there is a new photo gallery and video library that will be regularly updated with new content from across the Department of Justice. And of course, “The Justice Blog” will be a hub of information for the Department.

USCIS has not only revamped its website, it has also revamped its some of its methods and procedures. More US employers are reporting random, unannounced visits by the Fraud Detection and National Security Division (FDNS) of USCIS. FDNS inspectors often use a set script of questions and ask to speak with an employer representative and any foreign workers at the work site.FDNS uses what it learns from these visits to add fraud indicators to its database in an effort to identify patterns and potential fraud during adjudications.

Employers can prepare for such visits by conducting a self-audit of their I-9s and H-1B Public Access files, and by ensuring strong compliance policies are in effect. We recommend designating an “immigration compliance officer,” who should contact counsel immediately in case of an FDNS site visit. We also recommend preparing a response plan in advance that includes everyone from upper management to receptionists.

Finally, the Department of Labor (DOL) has issued a frequently asked questions (FAQ) sheet about the new iCERT Portal and the newly redesigned ETA Forms 9035 and 9035E. Topics discussed include how to correct an invalid federal employer identification number after a denial on that basis; filing on behalf of a new company created through a merger, acquisition or sale; the required contact information to enter for employer point of contact; how to enter a prevailing wage survey on the new LCA; and how to withdraw an LCA after certification.

USCIS on October 7, 2009 issued guidance to clarify for performing arts associations and their members the regulatory requirements for agents who file as petitioners for the O and P visa classification.

USCIS Changes Filing Location for Forms I-800 and I-800A

USCIS on October 6, 2009, announced a new address for prospective adoptive parents to submit Form I-800 and Form I-800A. The change is effective October 6, 2009 and the applicants have a 30-day transition period before USCIS will return incorrectly filed petitions.

USCIS Changes Filing Location for Form I-600 and I-600A

Now for the regulars – this month’s Immigration Article entitled ‘MAVNI Program: Direct US Citizenship without Permanent Resident Status’ explores how the one-year MAVNI Program gives a direct route to U.S Citizenship regardless of the permanent resident status of the foreign national. Also check out our In Focus section for this month, which explains how a J-1 Umbrella Sponsor can help you obtain a J-1 Visa.

We congratulate Maria Silva for winning last month’s Immigration Quiz. Again, we received a significant number of responses from our readers, who talked about various solutions to support their position, but Maria Silva gave the correct answer and won free online consultation to discuss the concerned Immigration issues. So it’s time to get ready for this month’s quiz. If you know the correct answer your name might be featured in next month’s newsletter. All the Best!!!